Different ways of self-fashioning is something I find very interesting, so I was anxious to find out how a city can incorporate this as well. The photographers who are included in the exhibition, who are by the way mostly male, have helped create the vision of contemporary Rotterdam and how it is perceived by visitors as well as its residents. The exhibition visualizes Rotterdam from the 19th century until now and shows the spectator how Rotterdam was build, rebuild and shaped by different forms of labour and technologies. It also shows how the daily lives of the Rotterdammers has changed over the years and how its population have grown to be more culturally and ethnically diverse.

What was striking to me, was that the photographs mainly included visual images of activities in the centre of the city and the Port of Rotterdam. Which corresponds with the ideas and notions of Rotterdam: it’s a dynamic international city with modern architectural buildings and a lot of maritime activities. The exhibition displayed photos from a range of photographers whom were/ are specialized in photographing ships, harbours, people and architecture. Their work thus helped construct ideas and notions of what is associated and seen as contemporary Rotterdam.

“The experience of the photographs, their meaning and impact cannot be reduced merely to a visual response but must be understood as a corpothetic engagement with photographs as a bearer of stories in which visual, sound and touch merge.” (Edwards in Edwards & Bhaumik 2008: 246)

Photographs tell stories, they do something, they want to be seen. What Edwards stated in the used citation is that looking at pictures is more than just using your eyes to see the visual image that is captured in the photo. When we look at a picture we feel things, we are seeing and experiencing through our entire body. Visual images move us.

Rotterdam presents itself as a dynamic city, which I interpret in this context, as a city in a fluid motion. She is constantly renewing her geographical space and demanding a place in the international markets. Rotterdam is known for creating innovative ideas, such as the first indoor food market, the Markthal which is placed near the iconical cube-houses. Even The New York Times stated that the city should be included in your ‘places to go’ list. 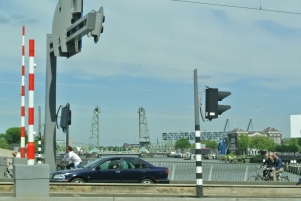 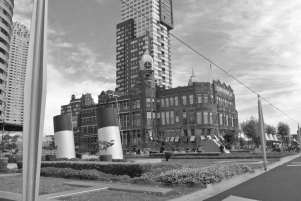 Rotterdam Skyline (Photo made by me)

That Rotterdam is a dynamic city and is reshaping her skyline and streetscape was shown in all of the displayed pictures and videos. For example, there were pictures of the development of train and metro stations from before World War 2. The accompanying videos showed how the industrialization of the city affected the everyday lives of the Rotterdammers.

As I was walking through the exhibition I, of course, did some participant observation and tried to listen to people reacting to what they were looking at. There were two older women who were discussing a photo of the 1930’s streetscape of Rotterdam in which the streets were almost completely free of people and vehicles. They were almost full disbelieve that this was possible in the city, but also concluded that back then there weren’t as many people out and about on the streets, because they had to work and had no time to go out. Moreover, they said that there weren’t as many people then as there are now.

I was mostly interested in the way the exhibition would present the Rotterdammers. As someone who was born in the city and has a family who could be referred to as ‘real Rotterdammers’, I also wanted to know how photographs would capture the ‘no-nonsense attitude’ of its diverse inhabitants. However I was also curious to find out how the exhibition presents the multicultural society of Rotterdam.

The selection of photographs made by Robert de Hartogh showed how migrants tried to redefine their culture and traditions in a city that would become their new home. His photographs show the spectator that migrants, who are generally seen as ‘the Other’, have the same kinds of practices that the Dutch have: like celebrating birthdays, weddings, having a family day, going to school and/ or work and practice religious believes. The pictures of De Hartogh seek to create empathy for the migrant(families) and in a way ‘humanize’ them.

The selection of photographs made by Marrie Bot interconnected well with those of De Hartogh. She seeks to photograph taboos that are connected to socio-political themes. The photos that were on display had a theme, or taboo, which every human being can connect to: funeral and mourning rituals. What she did was photograph these aspects of social reality, which are usually hidden, in a multicultural setting and by doing this she deepens our understanding of other cultures (in Rotterdam).

I found that the ‘no-nonsense attitude’ was mostly captured through the use of black and white photography which gives a feeling of rawness and honesty, an ‘it is what it is’ experience. The vulnerability of the city, and thereby that of its residents, was I think captured in the war photos that displayed the way in which Rotterdam rebuild and reshaped itself during and after the war. Rotterdam(mers) is/are not sitting around and wait for something to happen, but do what needs to be done without  a lot of complaining.

The exhibition represented this attitude by displaying a range of photographs that embodied this attitude. Other photographs showed the lesser known parts of the city centre, those that are abanded and neglected and may not be accessible for people or not wants to be seen.

Although poetically constructed photos of the ‘darker’ side of Rotterdam were included, the exhibition continued visualizing the existing visual idea of Rotterdam. Thereyby lacking, in my opinion, giving a new vision about the city which could transcend outside the city centre and the Port of Rotterdam.

One thought on “Looking at Rotterdam”